Scams are on the rise but new research commissioned by unbiased.co.uk reveals that pensioners are more scam savvy than teenagers.

In fact 66% of teens and young people have admitted to falling for scams, as opposed to 25% of those aged 60+ - and a quarter of teens said that this happened more than once.

However, it’s not surprising as our research also found that 52% of 16-29 year olds admit to using the same password across all devices, compared to 24% of  those aged 60+.

What about celebrity backed scams?

Worryingly, the rise of scams also includes a growing number of online promotions and endorsements from celebrities, which are simply not true.

Not only does this take advantage of household names, it compromises the trust of people who have no reason to think that scammers may use celebrities maliciously.

Unbiased stands by Martin Lewis whose inclusion of celebrity fronted scams in the online safety bill is a significant win for best practice in the financial services industry.

When it comes to online celebrity endorsements, over half of Britons (51%) would assume the product or service was safe to buy and certainly not a scam. Of this statistic, 60% of 16-29 year olds would trust a celebrity fronted advert, whilst only 15% of aged 60+ Brits would.

Are we reporting scams?

Fortunately, 90% of us would report a scam, though only 17% to the FCA. Yet of those who wouldn’t, 29% said it wasn’t worth it, as they knew they’d never get their money back and 26% say they have NO IDEA where to report the experience.

Our research also took a closer look at social media scams, with 41% of the 1,500 Britons polled admitting they’ve previously had an account hacked, targeted or duplicated by scammers - and of this, 16% saying it’s happened more than once.

And the result of these scams is clearly affecting the nation’s mental health, with 36% of respondents saying it made them feel violated and 35% admitting it’s made them less trusting of social media.

“A lot of people turn to Unbiased when they have been affected by investment or pension scams.

The old saying about “if it seems too good to be true, it probably is” is correct in the case of scams.

If the sales tactics seem pressurised, or you’ve been contacted out of the blue, speak to the FCA, and if you want financial help, let us match you to one of the 27,000 trusted and regulated financial advisers on our platform.” 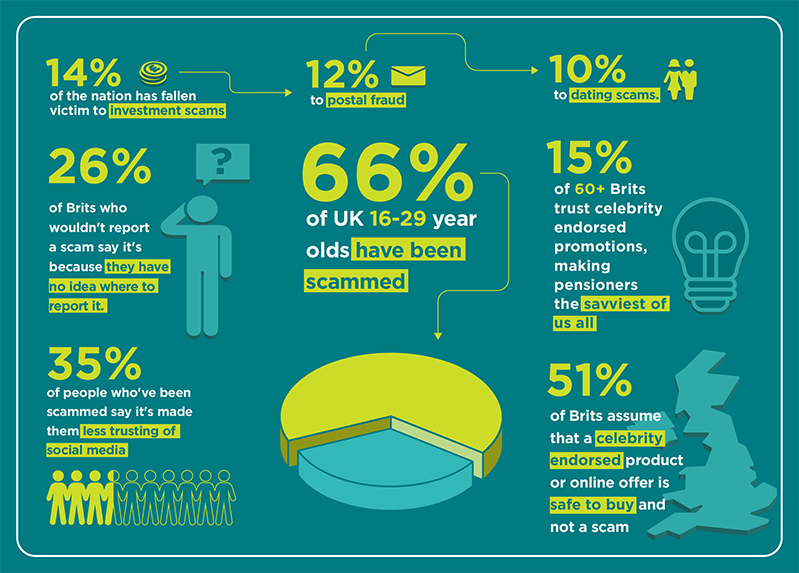 This research of 1,500 UK based Britons aged 18 and over was commissioned by Unbiased and conducted by Perspectus Global on behalf of Unbiased during February 2022.