Drawdown or annuity? Rolling with the risks

In part 1 of this article, ‘Crunching the numbers’, we compared a drawdown scheme with an annuity, and the level of return needed for the drawdown scheme to be the better option. In part 2, retirement options expert William Burrows considers how well this might hold up in real life.

Welcome back! If you’ve read part 1 (and you can do so here) you’ll have seen how a drawdown scheme can potentially be a more lucrative option than an annuity, given certain conditions. But things are never quite that simple, and we haven’t yet answered the second question I raised, which is:

What level of investment risk would you accept in exchange for the potential for more income?

This part is ‘the small print’. We saw in part 1 that a drawdown plan only needs to make an investment return of 2 per cent a year (plus charges) in order to beat an annuity very easily. Or did we?

Think again! That 2 per cent a year investment growth may seem like a very low level of return, but it’s not as easy as this. The spanner in the works here is known as the ‘sequence of returns risk’.

What is the ‘sequence of returns risk’?

This is one of the biggest considerations for anyone in a drawdown plan. Investing in a fund from which income is being withdrawn is very different from investing in an untouched fund. This is because, if returns are low or negative in the early years of the drawdown plan, the pension capital will be eroded at a faster rate. This in turn will make it very difficult for the drawdown plan to recover from early losses, even if returns pick up considerably later on.

As a result, the amount of income available in the future may be less than expected, because the pension pot has not grown sufficiently. It may not be able to sustain the original level of payments, so Peter (our retiree from part 1) might have to take a reduced income or risk running out of money entirely.

As before, let’s work through the example. We will assume that Peter started his drawdown on 2 February 2015 (when he was 64) with a pension pot of £100,000 after taking tax-free cash. The annuity income that he could have purchased was £5,000 per annum (£417 per month), and he takes this amount as regular monthly withdrawals.

Let’s also assume Peter’s drawdown plan is invested in the stock market in a fund that mirrors the FTSE UK All-Share Index*. 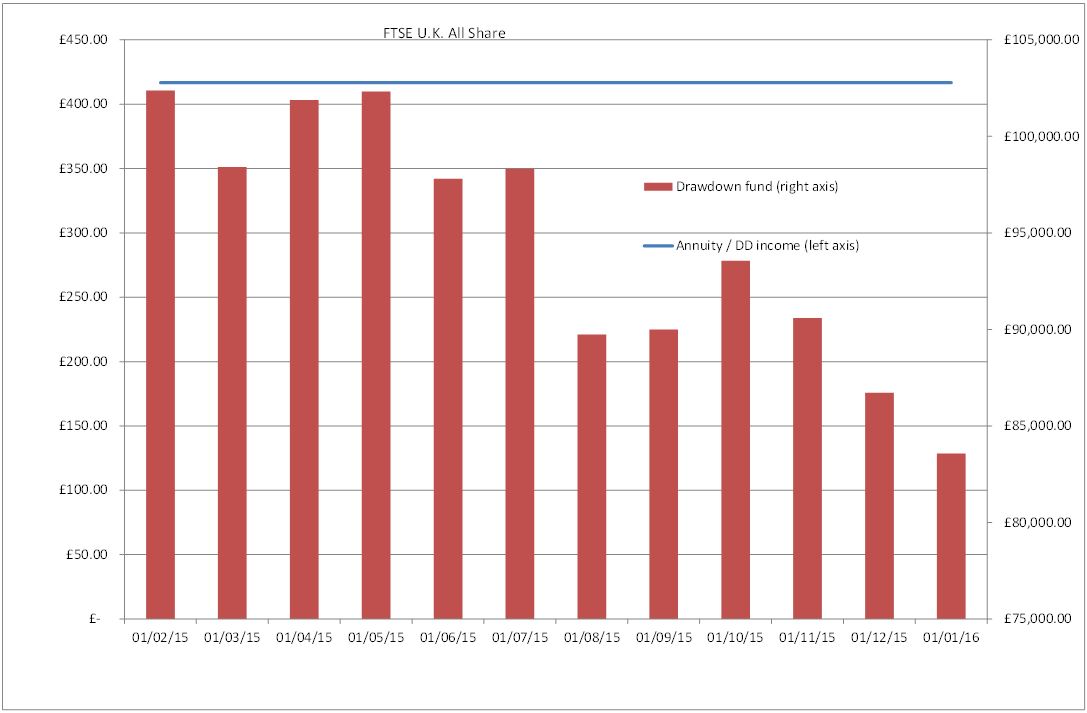 Why does this happen? Well, a fund in which all the money were untouched would fall in proportion with the FTSE and then rise with it again, by the same proportion. But because Peter is taking money out of this fund every month, the fund has less and less ability to ‘put the weight back on’ when the FTSE rises, because there’s less money in it to generate returns. So it suffers the full impact of every fall, but benefits less and less from every rise. That, in essence, is the sequence of returns risk.

Of course, the above example is only a snapshot of one year. In future years the FTSE performance (and investment returns) could be considerably better than this. Of course, they could also be similar – or a lot worse yet.  That’s the risk Peter takes. What this analysis shows is the effect of entering a drawdown scheme during a year of volatile markets.

Thanks – now I’m more confused than ever

This article isn’t intended to put anyone off drawdown, or to make the case for annuities. Rather, I want to highlight the main pros and cons of each as plainly as possible. To summarise:

So which pension option is best for me?

If nothing else, I hope I’ve shown how difficult it is to compare annuities with drawdown. After all, you really are comparing apples and oranges – a type of insurance versus a type of investment.

In my experience, most people (no matter how wealthy they are) want and need some income certainty, coupled with some flexibility and control. People also tend to avoid risks more as they get older.

Therefore, although drawdown can (on paper) easily beat an annuity at the moment, there are inherent drawbacks in that option. Because of the level of risk, there will always be a strong argument for annuities as the ‘safe’ option. The best way to decide which is right for you is to discuss it with an independent financial adviser, who can assess your circumstances as a whole.

About the author
user
William Burrows
William Burrows is a financial adviser with Better Retirement, specialising in all aspects of pensions, annuities & drawdown. He writes extensively about retirement income matters and is often quoted in the national press, radio and TV.

Will my workplace pension be protected?