How will you set up your pension when your retire? Will it be something plain and simple, or a trickier (but more flexible) arrangement? These days it’s become harder to make your retirement plans take off – so find yourself a good co-pilot. Article by Nick Green,

Flying lessons in retirement, anyone? Why not – if your pension will stretch to it. Let’s suppose your instructor greets you on day one with a simple choice: ‘Plane or helicopter?’ This is a bit like the choice your pension provider gives you. Bear with us - that's not as whacky as it sounds.

Your pension provider might offer you the choice of pension drawdown or annuity - and in a way, that's like the choice between a plane and a helicopter. You see, it's been jokingly said that 'aeroplanes want to fly - helicopters don't'. Helicopters actually aren’t much harder to fly than planes, but they are certainly more complex machines that make greater demands of their pilot. But it’s this complexity which also makes them so versatile, and more manoeuvrable than a plane.

This is similar to choice available to you in the world of pensions. On the one hand you have the annuity, a simple product that pays you a guaranteed income for life. Once you get it going it basically flies itself – much like an aeroplane.

On the other hand, you have drawdown. This is the helicopter option: more complicated, harder to handle and potentially riskier, but at the same time more flexible. And your choice of which pension vehicle to take – annuity or drawdown, plane or helicopter – may depend on the landscape you face.

Since 2008 the UK economy has been stuck in a rut of low interest rates. Although this has been good for homeowners it has been bad for savers, and especially bad for new pensioners. Low interest rates mean low gilt yields, which means annuities cost more. In other words, you have to pay more up front to get the same level of guaranteed income – or else accept a lower income.

Nor are things improving. The cost of buying an annuity has risen by 30 per cent since the Brexit vote, according to pensions consultants Hymans Robertson. In a survey of 600,000 employees, the firm found that only 25 per cent had a good chance of meeting the level of retirement income regarded as appropriate by the Department for Work and Pensions (DWP).

Much of this is due to the bleak current outlook for annuity rates. As a result, many new pensioners are likely to opt instead for drawdown schemes. But this creates its own set of risks.

Drawdown schemes are helicopters: more agile, but harder to fly. Their main advantage is that you can vary your income, while another (which is also the main risk) is that your money stays invested in the stock market. In times of low interest rates this may be seen as a plus, in that you can benefit from future gains in the market. This contrasts with an annuity, which would be locked into the rate at which you bought it.

For example, Craig buys an annuity for £100,000 that gives him an annual income of £5,000. The amount is low because gilt yields are rock-bottom. Five years later, interest rates and gilt yields rise much higher – but it’s too late for Craig, whose annuity is fixed at £5,000.

If Craig had chosen drawdown instead, his fund would have been able to grow in line with stock market performance. Of course, it could also do badly in a falling market – unlike the guaranteed annuity.

The annuity, like a plane on autopilot, will keep on flying into the sunset at the same altitude – paying you the same income for life. This isn’t the case with drawdown. Suppose Craig takes out a drawdown scheme with his £100,000 and decides to take £10,000 a year from it. Assuming the fund grows at a steady 3 per cent, the amount would decrease over time like this: 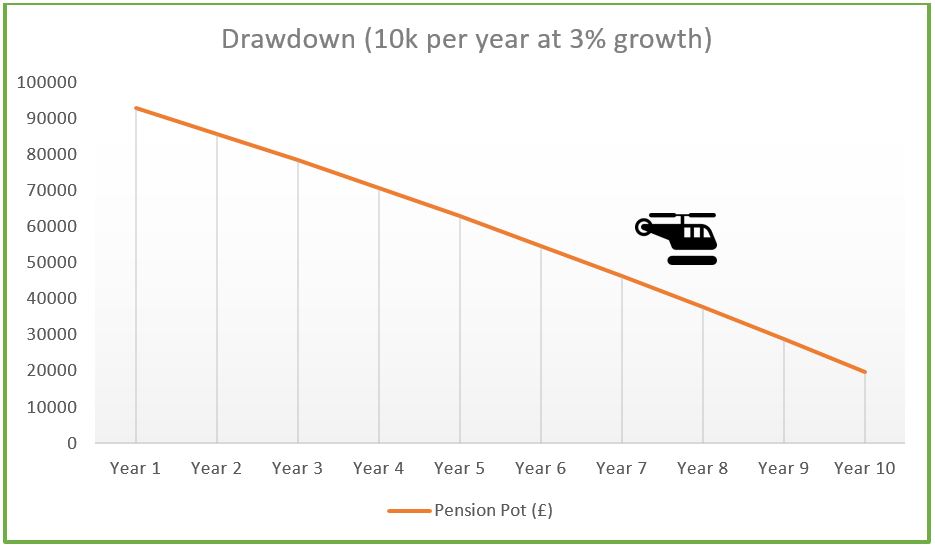 Notice how the line isn’t quite straight, but curves downwards. This is because the fund shrinks faster over time, as each year there is less money to generate growth:

However, in reality the line wouldn’t look much like this. Stock markets are constantly fluctuating, so the fund may sometimes grow by more than 3 per cent and sometimes by less – it can even shrink. So although Craig’s withdrawals remain steady at £10,000, the fund size would have far more ups and downs, e.g.

The ride could of course get much bumpier than this. And if Craig were also to vary his withdrawals, for instance by taking out £20,000 in one year for additional spending, then the graph might start to look more like the Alps.

A particular risk of drawdown schemes is taking out money during times of poor performance – especially in the early years. This can make it much harder for the fund to recover during the good times, because there’s less money in the pot to generate growth. Your fund starts to ‘run out of juice’.

Why drawdown takes some expert flying

When interest rates are low and stock markets are doing well, many retirees may edge more towards the ‘helicopter option’: the drawdown scheme. But as the examples above demonstrate, piloting such a scheme isn’t straightforward. You remain exposed to the turbulence of the market, and small misjudgements on your part (such as withdrawing too much at the wrong time) can send your savings plummeting. Unlike the ‘fire and forget’ annuity, a drawdown scheme needs regular monitoring and perhaps active management to keep it flying on course.

Another important point to bear in mind is that economic circumstances change. With drawdown, you are always to some extent ‘flying into the unknown’ – as there is no guarantee at all that the stock market will deliver the growth you are looking for.

For all these reasons, it’s prudent to hire a great co-pilot in the form an independent financial adviser. Your adviser will have extensive knowledge of how your scheme works and how to keep it running smoothly – as well as keeping an eye on the financial weather for you.